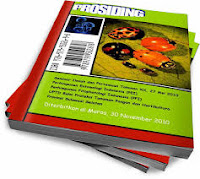 In Indonesia, the use of microorganisme for controlling insect pest on corn had not been populary applied. However, the use of fungi such as Beauveria bassianaVuill. recently seemed had paid attention by government. It is prospective to be developed as biological agent. The use of B. bassianaVuill. as biological agent is chosen due to its compatibility to the other control agent and its low cost in mass production as well. Onthe other hand, the technology appliance used seem neither complicated nor capital coasted. Several field trial of B. bassiana capable to control corn stemborer Ostrinia durnacalis significantly.............Selengkapnya dapat dibaca disini
Diposting oleh owner di 5:12 PM